This antique whaling print, from 1857, is a whaling scene, about 175 years old. It is a hand colored lithograph of whales, published by Furne, for Edouard Travies, in Paris France, in 1854. Excellent condition, bright watercolors. Measurement 6 1/2 x 10.” 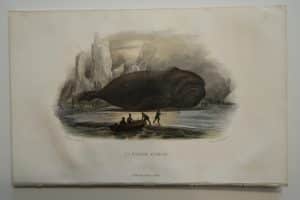 Travies Whales Baleine Franche. A Historic Antique Lithograph. This antique print, from 1857, is a whaling scene, about 175 years old. It is a hand colored lithograph of whales, published by Furne, for Edouard Travies, in Paris France, in 1854. Each piece was printed in black onto white paper from a specially lithographed limestone plate, and hand-colored with watercolors, applied by hand, with accents of Gum Arabic, giving depth to the bookplate. All the artwork was that of Travies, he lived 1809-1865. Travies was born Doullens France, in March 1809. Doullens is in the Somme District of France. He is considered to be one of the best, French artists of that time. Even water-coloring the artwork himself.

Lithography is an antique printing method. The technique was extensively utilized during the 1800’s. (It was replaced by color lithography, or printing in colors with limestone plates). Generally a lithograph was printed in one color, black. A type of greasy crayon was used to draw onto a special type of limestone, with just the right porosity. After the image was completed, the limestone was emerged into nitric acid. That burns away what was not under the greasy crayon. Leaving that portion of limestone in relief. The plate was inked up and printed onto paper.

Watercolor lithography was utilized in the 1830’s through the 1860’s had an additional step. Printed from a limestone (lithograph) plate and literally enhanced by hand with watercolors. It is the water-coloring, that makes these antique prints, practically jump off of the page.

The Evolution of Printing in the Age of Discovery

The history of antique printing methods of the 16th, 17th, 18th and 19th centuries is interesting. My website consists of old prints, published in obsolete printing methods, that really do not exist today.  The subject revolves about how fast information could be published for readership. Readership revolved around new discoveries. Especially in the area pertaining to natural history. If one could just discover a new species. It would boost the desire for information. Which had a trickle down effect. It meant sales which equivocated to employment & hopefully profits.

Soon publications became subscriptions. Everyone wanted them. Like today, everyone wants current information. Initially periodical subscriptions were made to those who could afford it: royalty, clergy, noblemen, etc.  Soon educated physicians, academics, lawyers and businessmen wanted books. Oftentimes on expeditions, specimens were collected and captured, many alive. Many did not survive the journeys home. Nor the conditions when relocated.

Demand for information always leads to greater supply of publications. That was true centuries ago. As a result publishing books & periodicals became more popular. First up was to publish religious material in the 15th & 16th centuries. Only the high priests could convey the printed messages. This lasted for a long time. Around 1800 or so, many more people were reading. So it was fashionable to be educated. Which was done by reading books. Many of which were illustrated. Everyone could understand a beautiful picture. People did not have to understand all of the words. Lifelike illustrations explained quite a lot.

Craftsmen and tradesmen had life long careers in the 17th, 18th & 19th Centuries.

Tradesmen in the old days, had life long careers. A true expert created, Travies Whales Baleine Franche. This was true throughout history of working trades, until the turn of the 20th Century.  Journeymen and Apprentices severed their “employers” for several years, up to 7 and 10 years,  for a pittance of room and board at best.  To become a tradesman, apprenticeships were required by law.  This was the only way that could go on to open your own shop or to work as a professional engraver, colorist or printer, themselves. Debtor’s prison was an unfortunate place to end up for those individuals that tried to fast track the system.

18th and 19th Centuries museums of curiosities became the rage.

Often times young men, early scientists, aboard ships recorded the natural history sightings they saw along the way. They recorded every detail of the natural history specimens they came across. All of this absolutely fascinated the public. So the history of illustration, depicting and describing what had been found, along these tremendous explorations became a craze. How fast the information moved forward can be seen through the history of printing.

Exactly as the way things are moving forward quickly these days, so did it in the history of printing. It started with very slow laborious hand drawn pages by scribes and monks onto velum, to copper plate engraving on hand made hand laid linen rag paper, and moved forward to faster and faster printing, from lithography, hand colored or not to printing in colors, chromolithography. All driven by readership subscriptions. It all ended about 1900. when photographic printing became the 20th century tool, to today, when everything is digital and untouchable on the internet.

Learn more about whales and how they have been killed for centuries in this scholarly article, How we all kill whales | ICES Journal of Marine Science | Oxford Academic (oup.com) If you have questions about Travies Whales Baleine Franche, please call 413-245-4197 or email us at anne@annehallantiqueprints.com. Thank you for visiting our website.