Adirondack White Fish is over 100 years old. An antique fish lithograph which published New York 1895-1909. It is the artwork of Sherman Denton who set the standard of fish illustration. 9 1/2 x 12″.  Free U.S. ground shipping.

Adirondack White Fish or Round Whitefish or in Latin Coregonus Quadrilateralis Richardson. Today the endangered species of Salmon is found in over 60 Adirondack lakes. This is the art of Sherman Denton. It is a 120 year old antique lithograph. This piece published during Denton’s life. In New York during 1895-1909. At the time, Denton was employed for the State of New York Fisheries, Game and Forest Commission. He provided the watercolor illustrations for 100 chromolithographs of native species of American fishes & wildlife. His work set the standard of fish illustration.  The antique print measures 9 1/2 x 12″.  Free U.S. shipping. 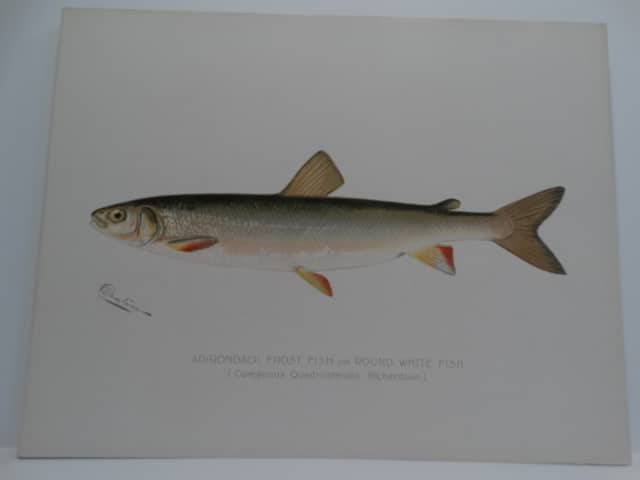 Sherman Denton was born in Wellesley, Massachusetts which today is complete with Denton Street in honor of his work and home from 1856 through 1937. Sherman’s father was a naturalist and geologist. He had taken Sherman at age 15 and in the 1880’s to Australia, New Zealand and New Guinea, where he collected natural history specimens. During this time he managed to gather the largest collection of freshwater pearls in the United States.

Upon returning to America as a young man Sherman Denton landed a position working for the “Forest, Fish and Game Commission of the State of New York” and stayed from 1895-1909. Denton provided lifelike watercolors illustrations for over 100 chromolithographs. This is what you are looking at for sale. It is one of the original chromolithographs which published more than 100 years ago.

During this time he developed & patented a method for mounting fish without them losing their natural colors. Denton set the standard for natural history fish illustrations. Furthermore Denton became the leading artist of fish models for collectors and museums. Collections are housed at the Smithsonian Institute, the Field Museum of Natural History in Chicago, and the Louis Agassi’s Museum of Comparative Zoology at Harvard University.

During the 1880’s, Denton and his brothers accompanied their father, a geologist, on expeditions to Australia, New Zealand and New Guinea where he collected natural history specimens. Upon his return, Denton worked as an artist for the US Fish & Game Commission at the Smithsonian Institute, where he illustrated their annual reports and also developed and patented a method for mounting fish without them losing their natural colors. He became the leading maker of the Field Museum in Chicago and the Agassiz Museum at Harvard. Denton was hired by the State of NY Fisheries, Game and Forest Commission to illustrate their annual reports, providing the watercolor illustrations for some 100 chromo lithographs. Denton’s superb drawings vividly illustrated the appearance of live fish, and set the standard for all natural history fish illustrations.

Adirondack White Fish or Round Whitefish is an Antique Chromolithograph

This Adirondack White Fish or Coregonus Quadrilateralis Richardson is antique fish lithograph in colors. Antique is over 72 years old. This is 120 years old. Chromolithography is an obsolete craft whereas each and every color seen was printed from an individual key stoned limestone plate. Each and every color was applied within individual lime stone plate. A certain kind of lime stone from a particular part of Germany. It had the correct porosity to make a lithograph. Each plate was prepared in a special process for each and every color that was applied. It took a tremendous amount of talent, and craftsmanship. Superior registration by the lithographer was imperative for the final artwork rendering to be realistic.

See our large collections of fish & all ocean life for sale. Thanks to conservation efforts the endangered Round Whitefish is making a comeback in 60 Adirondack lakes. Read an article a few years old but pertinent. Thank you for visiting Anne Hall Antique Prints. Contact us at 413-245-4197 or email us at oldprint@verizon.net.