James Bolton Birds Nests Eggs from Harmonia Ruralis. The rare ornithology book published 1821 in London, England. Each plate is a fine early 19th Century watercolor ornithology engraving. They are revered antiques by collectors around the world. 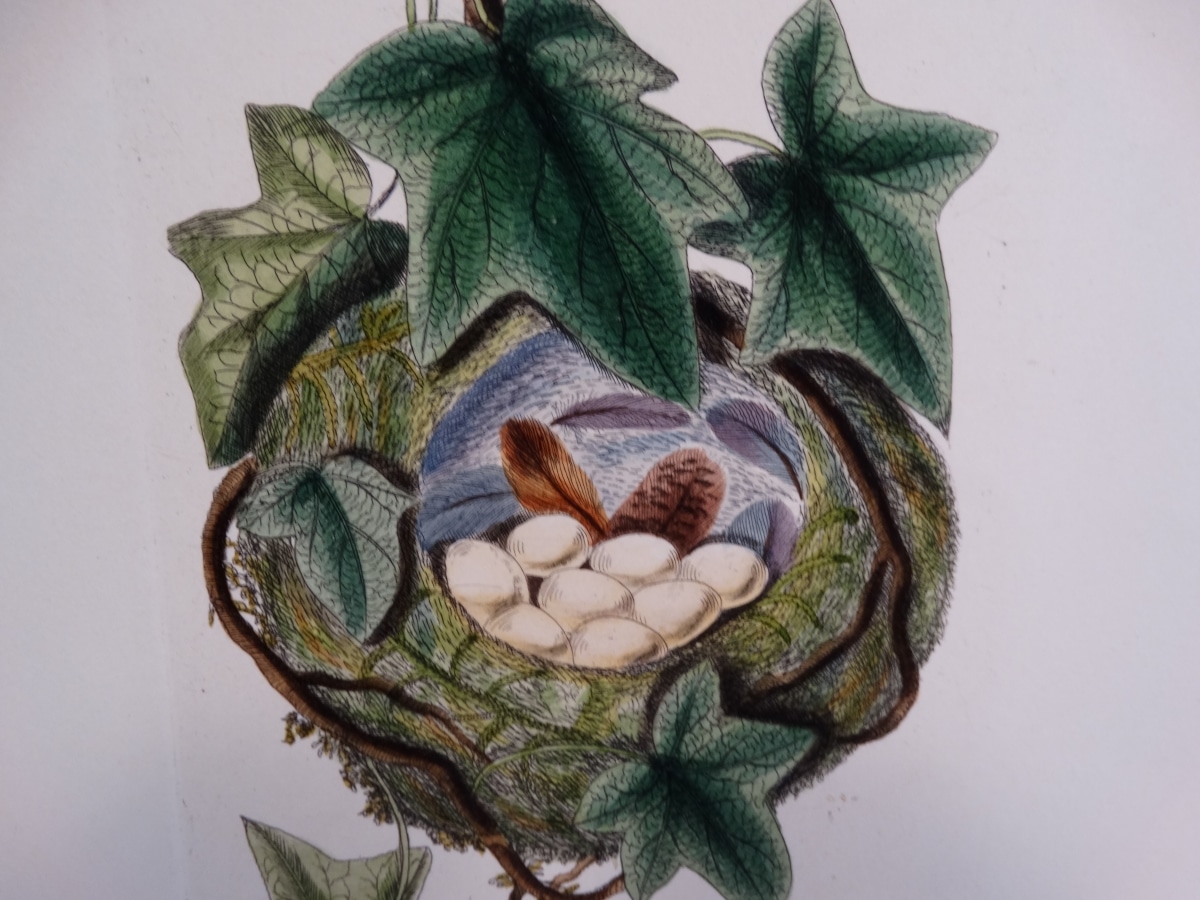 A collection of charming early 19th Century Ornithology bookplates. Sourced from James Bolton’s Harmonia Ruralis c.1810. These are paper antiques, and every piece is about 200 years old. While anyone can own a picture of Bolton’s charming engravings, only few can own the relic itself. The art work captures the bird in it’s natural habitat with it’s nest and eggs. Harmonia Ruralis provides a documented recording of common British Birds in explicit detail. The watercolors are bright and strong. Excellent condition. Sold only in pairs. Each piece measures 9 x 11 1/2.” Call 413-245-4197 to discuss your order with Anne.

James Bolton’s revered work on nests and eggs from 1807.  Sold in pairs. early 19th Century antique hand colored copper plate engravings. The depictions are of the eggs nests with the birds. Ornithology common to Great Britain.  These lovely old prints published in London in 1807. Harmonia Ruralis is an essay about the natural history of British song birds. It illustrated life sized figures of birds, male and female with natural attitudes. The prints are water colored copper plate engravings on a heavy wove paper. The colors are bright and vivid. There is some smudging, see the photos. Each piece measures 9 x 11 1/2″ and sold as Pairs.   One price for both prints.

These charming James Bolton Birds Nests Eggs are from Harmonia Ruralis. One of the most desirable books on British song birds of the early 19th Century.  It is a study of birds, the nests they made and the eggs they laid.  Harmonia Ruralis is an essay on the natural history of British song birds. Illustrated with life sized figures of the birds. The male and female depicted with their natural attitudes.  1821 hand colored copper plate engravings on a heavy wove paper. The water colors are bright and vivid.  Minor smudging, please see the photos. Each piece measures 9 x 11 1/2″ and sold as sets, the bird with its bird’s nest, one price for both prints.  Refer to the James Bolton Birds Nests Eggs & Click here to contact us.

Briefly why & how did the James Bolton work happen?

It was laborious craft of all those involved to publish James Bolton’s Harmonius Ruralis, published in London in 1821. Consider life in the early Nineteenth Century.  Apprenticeships could last for many years with only room, board and almost no pay.  Required by the guild!  As for the Naturalist… An assignment by the Royal Family on a voyage would be the ultimate.  The artistic recordings of song birds found in Britain was of interest to everyone interested in birds.  A favorite bird and their nest and eggs on a separate plates.

The illustrations had to be meticulously drawn, with the best accuracy. After the image was complete, it was transferred onto a copper plate. Next the engraver etched the plate with engraver’s tools called burins.  Paper was hard to find, and the engraver would have to re engrave another plate after 300 strikes. The water colorists would die at young ages, due to licking tips of their paint brushes with toxicity in it.  Yet these Bolton nest prints still exist in exemplary condition. That is due to the high quality of the rag paper without acid in it.  Paper was hand made of rag right up through the turn of the 20th Century. Coming from linen, flax, etc, NOT TREES, there was no acid in it. Paper was very expensive to make and not uniform in the 19th Century. Paper today (and during the 20th Century) made from trees which is high in acidity and does not last for long.

See more antique nest and egg lithographs and hand colored engravings Call Anne at 413-245-4197 to receive personal service and to see more options.  Or email: anne@annehallantiqueprints.com Thank you for visiting!